[hr]The article was originally published in the July 2015 edition of The Bowser Report.
[hr]

Tucows Inc. (TCX) joined The Bowser Report in January 2013 when it was trading for $1.50 a share ($6 adjusted for the 1-for-4 reverse split). Now, the company is trading for just under $30. As a result of this success, we decided to do a case study on Tucows, describing what it did right to be where it is today. 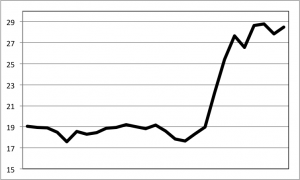 Since recommendation, another TCX segment, Ting, took off. The business introduced its Android application in April 2013, began offering Tri-Band LTE service and devices in December 2013, added the iPhone 5 to its list of compatible devices in March 2014, added gigabit fiber Internet access in Charlottesville, VA in December 2014, brought fiber access to Westminster, MD in January 2015 and opened its GSM network beta in March 2015. Access revenues grew from $3,965,684 in fiscal 2012 (right after recommendation) to $35,887,005 in fiscal 2015—growing 805%!

In December 2013, Tucows executed a 1-for-4 reverse stock split and began trading on the NASDAQ Capital Market, moving from the NYSE MKT. Wall Street appeared to favor this move, as the stock price has grown 103% from when the transition took place (December 30, 2013) to the current price.

Tucows, like many of our most successful companies, formed a perfect storm of business and financial success. The company operated in a hot segment, online services, but had a unique catalyst that had yet to fully reveal its potential, Ting. Once the catalyst ignited, the company’s financials and  the stock price took off.

Tucows is a perfect case study for The Bowser Report’s objectives. Through fundamental analysis, we attempt to discover stable businesses with strong upside potential. Of course, predicting the future is impossible, but our tried and true method leads to enormous profits if you are patient.

Since recommendation ($6 a share)*, Tucows has soared to a high of $29.73—a maximum gain of 396%. To Tucows, great job. To all of our subscribers who bought this recommendation, congratulations. To all of those who did not, do not worry, there will be more multibaggers† in the future. Just be patient and stick to the Game Plan.

*$6 a share at recommendation is adjusted for Tucows Inc.’s 1-for-4 reverse split that took effect in December 2013.

The Bowser Report is a monthly financial newsletter that specializes in small stocks trading for $3/share or less. Our goal is to provide the individual investor with relevant information on microcap stocks. Each month, we recommend a new company, provide information on past recommendations and report news surrounding the microcap marketplace.

Become a member of The Bowser Report now!

About the Author: Thomas Rice