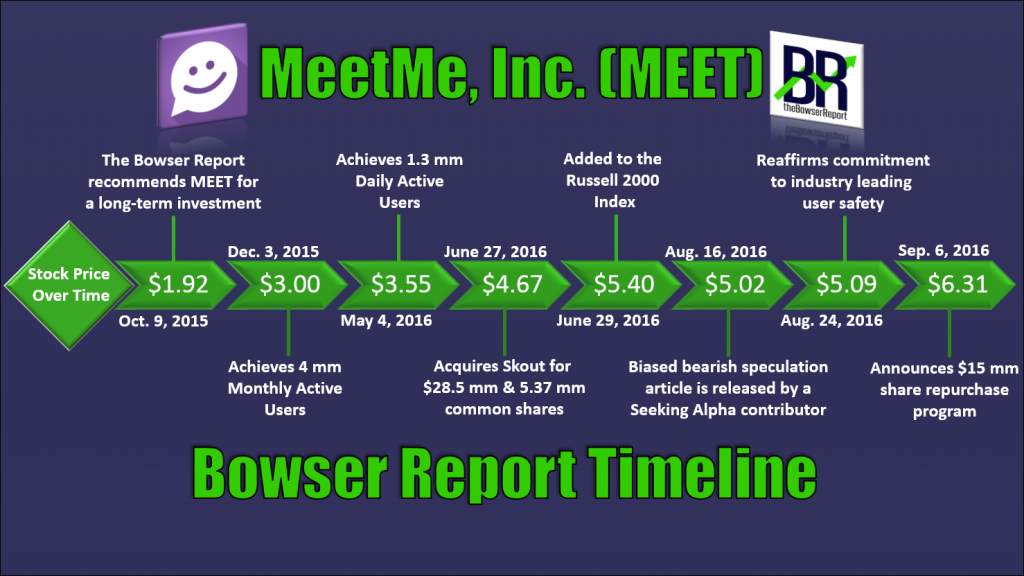 MeetMe, Inc. (MEET) share price has shot up over 300% since our recommendation and has a 52-week high of $8.11. Publisher Thomas Rice mentioned the company's financial outlook in the monthly recommendation analysis as a strength due to the potential advertisement revenue growth.

The best part about the Bowser method of picking stocks is that these fundamentally sound companies are more likely to surprise investors with the allocation of assets as it typically doesn't pose a threat to liquidity. MeetMe has followed this pattern, certainly rising so dramatically due to its ability to surprise investors.

Not only has MEET consistently beaten on earnings, but the company has increased its active users, acquired Skout, and announced a large share repurchase program. This indicates growth, impressive asset allocation with synergistic acquisitions, and a constant addition of value to keep shareholders happy.

The bearish article that was entirely based on speculation hit MEET hard as it questioned the company's ability to keep its platform secure. The Seeking Alpha contributor tried to drive long-term investors away by implying that a cascading series of events would occur once the firm's advertising realized the danger associated with using the application.

Regardless, analysts have not lowered targets, short interest has increased, and the share price has rallied. This anticipation of larger firms pulling their advertisements has no merit, and as investors can see, advertisements have remained consistent.

About the Author: Faris Sleem

Faris is currently the Editor of The Bowser Report and also creates content for the online blog. He has multiple years of long-term investing experience and is a full time day trader. He has experience with fundamental and technical analysis for stocks of all market caps, futures, and stock options. He has multiple years of trading experience, and day trades everyday. Faris has his own LLC called Trade with Techs, LLC and is ran through tradewithtechs.com. If you have any questions please feel free to contact him via e-mail or his website.